Causes of development of atherosclerosis of peripheral vessels

Obliterating atherosclerosis of lower limb arteries is a variant of the current generic of atherosclerosis. General atherosclerosis (arteriosclerosis), which in old age is observed in the majority of the population, leads to diffuse vascular changes and is relatively benign.

Atherosclerosis affects the blood vessels of the muscle-elastic type and leads to their gradual overlap. Often affects the arteries of the lower limb, upper limb pain is much less and less.

Factors of importance in the development of atherosclerosis of the lower extremities: 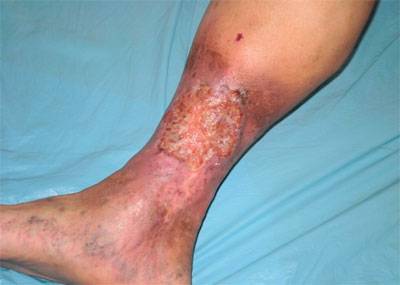 At III degree of ischemia, there is often deep and extensive ulcers, which often are localized in the ankle or foot. Ulcers heal poorly due to decreased blood supply, with prolonged duration can be complicated by the emergence of microbial eczema.

For the IV degree of ischemia is characterized by the increase of trophic disorders until the development of gangrene.

When gangrene is necrosis (necrosis) of tissue due to complete cessation of the blood supply. Can affect one or several fingers, sometimes develops from necrosis of the entire foot and lower leg. Gangrene can occur in dry and wet type.

Dry gangrene option – more favorable form of the disease, thus there is a clear boundary (demarcation) between the dead and viable tissue. Nekrotizirovannye areas rapidly darken until black, is a loss of fluid to the drying up of dead tissue. There may be independent rejection of sequestra (finger or foot) at the demarcation line. Pain syndrome moderate.

Wet gangrene often develops in the decrease of the resistancebody. Occurs edema of the distal limbs, skin color changes from bluish to bluish black, are characterized by a pain syndrome. The line of demarcation is not formed, so the necrotic process extends proximally (up the limb). Due to the absorption of toxic products of decay rapidly increases toxicity.