According to De Bakey classification, which today is used most often, there are three types of dissecting aortic aneurysm:

There is an alternative classification of dissecting aneurysms in which there are two types of aortic dissection:

Symptoms depend on the length of the bundle and vnutriserdecnuu hematoma, ischemia of organs, compression of aortic branches. 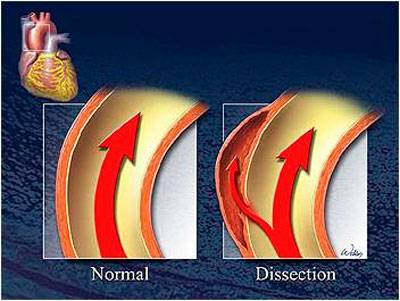 Dissecting aneurysm of the aorta can occur in several ways:

The disease usually begins suddenly. The first symptoms are similar to manifestations of cardiovascular, urological, neurological diseases. The main symptom is rapidly growing intolerable pain behind the breastbone, spine between the shoulder blades, lower back, epigastric. The pain migrates during the separation.

In addition, the following are possible symptoms of dissecting aneurysm:

A dissecting aneurysm occurs in acute, subacute and chronic form. Acute can cause death within hours or days. Sub-acute lasts from several days to three to four weeks. Chronic disease may last for several months.

In the acute form of aortic dissection the patient is experiencing severe ongoing pain in the chest and epigastric region, then in the back and along the spine. The pain increases in waves, which suggests that the process of separation continues. Sometimes shock. May develop aortic valve insufficiency, there is an asymmetric pulse in the extremities, rapidly progressive heart failure.

In case of suspicion on the emergence of a dissecting aortic aneurysm requires urgent diagnosis, the main methods whichare:

Chest x-ray allows you to identify the signs of dissecting aneurysm: expansion of the aorta, a pleural effusion, absence of pulsation, the deformation of the contours of the aorta.

Echocardiography is more informative and accessible method to detect delaminated flap, identify true and false channel, to assess atherosclerotic lesion, status of the aortic valve, the condition of the thoracic aorta.